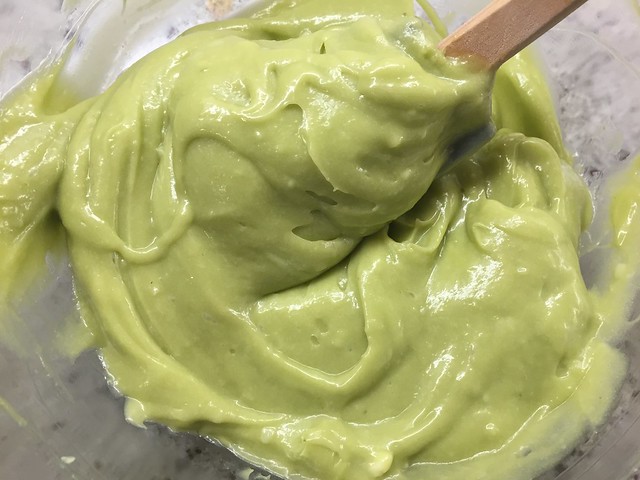 I wasn’t raised in a healthy hippy house by any means but there was one bridge my mom would never cross. Blue food. She would say, “Water’s blue, the sky’s blue, food is not blue!” Doesn’t mean she held me back from bubble gum ice cream when I was a kid, just means she wouldn’t be caught dead sneaking a bite.

In college I remember reading an article in The Oregonian about companies recognizing that kids were drawn to blue foods so they were coming up with everything from blue ketchup to blue fish sticks. BLUE FISH STICKS!!!!! I clipped that article and brought it to my mom, just to make her stomach turn.  I also think that might be the day that I realized, it is pretty gross to think about ketchup, a product that is inherently red or maybe green becoming blue. Maybe Mom’s right after all.

So fast forward to today. I’m a mom. A mom that signed up to bring dessert to the St. Patrick’s Day party at preschool. On the bright side, green is a food color but it isn’t really a dessert color. Unless you go with lime or mint, which aren’t necessarily slam dunks in preschool land. Of course there’s food coloring but I thought I’d try to see if the Internet and my imagination could team up to make a new themey favorite without food coloring.

The brownies are dark chocolate colored, you’d never suspect anything was out of the ordinary. First taste you think, these are moist and chocolatey but that quickly turns to, “Why is there an avocado aftertaste?” Take another bite. Same outcome.

The frosting, is green. Avocado green. As in the color of every appliance from the 70s that wasn’t harvest gold.  Unfortunately, avocado green is nowhere near kelly green. It looks like slime, like Gak, like something for Halloween, not St. Patrick’s Day! But technically it is green so I give it a try. Its texture is gummy and flavor is like an insanely sweet avocado. I tried to fix the flavor and texture by adding some cream cheese. This helped a lot but unfortunately it made the bowl of green slime, even bigger. Not exactly what we needed.

People don’t usually make avocado brownies because regular brownies are good on their own. No need to waste an avocado.

The frosting: the taste doesn’t compensate for what it’s lacking visually.

Moral of the story:

There will be food coloring at preschool on St. Patrick’s Day. And dessert will be delish!

Which colors do you think don’t belong on a plate? 5 thoughts on “Would you eat blue fish sticks?”